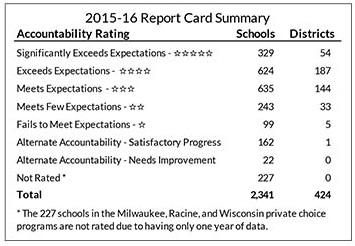 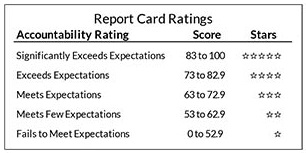 The News Release from the DPI explains “Accountability ratings are calculated on four priority areas: Student Achievement in English language arts and mathematics, Student Growth, Closing Gaps between student groups, and measures of Readiness for Graduation and Postsecondary Success, which includes graduation and attendance rates, third-grade English language arts achievement, and eighth-grade mathematics achievement. Additionally, schools and districts could have point deductions for missing targets for these student engagement factors – test participation (95% for all students and each subgroup), absenteeism (less than 13%), and dropout rates (less than 6%). Test participation deductions were not applied to district report cards for 2015-16 because of changes in federal education law. The Every Student Succeeds Act (ESSA) puts accountability for test participation at the school, not district, level.”

New this year was how student growth is measured. Student growth is based on a value-added model rather than a student measured on growth percentiles. The Wisconsin Department of Public Instruction has noted the “new weighting formula will adjust the weight of Student Achievement and Student Growth to account for the percentage of Economically Disadvantaged students in the school or district. Of the required report card changes, the preliminary analysis signals this has the potential to have the largest impact on report card scores.” This is meant to level the scoring field for schools with significantly differing populations.

The School District of Marshfield believes student achievement and growth of ALL students is important to overall success. In the past few years, the District has enhanced our student support model, Multi-Tiered Systems of Support (MTSS). MTSS is based on the assumption that all students can learn and achieve when provided with effective teaching, research-based instruction and access to standards-based curriculum.  Additional resources and staff have been added to ensure students who need additional support have access to it.

Please note: Due to changes in report card calculations, educational consultants at the DPI recommend comparing results of the 2015-16 report card to the state rather than prior year scores.